You may have seen a video of stock market traders if you are part of a WhatsApp group.

Let me briefly summarize: This is a show that allows viewers to call in and ask the host questions about stock markets. Here's a clip where one caller asks the host about the process of converting 20,000 shares from MRF LTD to digital. His grandfather bought the shares in the 90's. They were kept in paper form, or 'physical certificates' as they are known.

After explaining to the caller how to convert the shares from physical form to DEMAT format, the show host informs the caller casually about the current value of his shares.

Can you picture that - One Twenty-Eight Crore!

The video shocked me when I saw it for the first time.

My first thought was "How could someone buy MRF 25 years ago, What vision he had?" How does he motivate himself to stay invested? He could not resist the temptation to sell the stock. Even more so after seeing the stock grow many times over his initial investment.

According to me, a common investor would likely sell his investment if his investment return was 50%, 100 %... or at most 200%. This guy, however, has kept his stock for years and seen it grow at least twenty times or 2000%.

What is the secret to this?

Consider this: If we can get a grasp of what is going on here, it might give us some insights that will allow us to create similar wealth.

After I reread the entire thing (and watched it again), I was able to understand what was happening. These are my observations.

This situation is very interesting to me. There are many things happening and it's easy to draw some conclusions.

What can we draw from this?

You would probably agree with me on one simple inference: granddad made a lot of money simply by forgetting that he owned shares of MRF.

Imagine for a moment that he hadn't forgotten about his investments. Imagine if he could get a friend or broker to call him daily to inform him about the stock price for MRF.

Are you sure he would have kept his shares for so many years? Do you not think there is a high chance that he will sell his investment, at a return of 100, 200%, or 500%?

He forgot about his investment and didn't pay attention, so he kept his money over the years and reaped its benefits.

What would you expect if he had tried to track stock prices and keep up with new developments? He would analyze the data. When people analyze data, they don't just look at the facts. They try to be clever about it by adding their imagination. These fantasies are based on our perception of the ideal world. This is often called 'biases'.

In the trading and investing worlds, biases are the only thing that can stop you from a profitable P&L.

This chapter and the next are designed to help you overcome common biases.

Let's start with the most common biases investors and traders have. The chart below is a typical chart that technical analysts would find on their desks. This chart shows quite a few things.

I am certain that at least 8 of 10 technical traders will use a similar approach to analyzing charts. This chart is quite intimidating for anyone not experienced in technical analysis or charts. There are many things going on here.

Every element of this chart provides a unique insight for the trader. These so-called insights are not the only things the chart provides to traders.

The chart's complexity and inability to be understood by many people makes it seem that the trader is in complete control of the stock because of all the "important insights" he has derived.

This is commonly known as the "illusion of Control" - one of the most significant trading biases for technical traders. The illusion of control can lead traders to make statements such as "This stock will not go above 500" or "Go ahead, buy puts". If you ask them why they are so confident, they will quickly reply, "Boss, it's just Puts."

Why are they doing this?

Traders have a tendency to be attracted to complicated things. It is very relaxing to look at complex charts and make sense of them. It's like fighting fire with fire. Markets are so complex that the default idea is to fight it with complex analysis. You can only make sense of it, and no one else can give you that extra kick.

This physiological behavior can be attributed the "Illusion of Control".

No matter how many indicators or numbers you crunch, you cannot control all outcomes. There are many possible outcomes for any market situation. They are not all your control.

This behavior can only be overcome if you are focused on statistics and results. When you're dealing with a trading strategy, you need to be able to predict the likelihood of your next trade being profitable. This way of looking at market opportunities will allow you to be honest with yourself and others. You will also learn humility. You should not let noise get in the way of your goals.

With all my market experience, I can confidently say that simple analysis produces the best results. Complexity does not always mean better. As a trader, it is important to understand this and strive for a data-driven approach.

Another bias that plagues traders is: This is something I find quite fascinating. No matter how much experience you have, it will eventually catch up to you. Let me give you an example.

If you have been following 'Cafe Coffee Day Enterprises (CCD), you will know the real story about the stock price and what's going on with the company. The company was under the surveillance of the 'Income Tax Department', which is responsible for tax evasion as well as hoarding large amounts income. The story was first reported by Economic Times a few days ago. Here are the headlines:

When it comes to long-term investments, I have always held one stance: If the company's corporate governance has been questionable, then one must avoid the investment. We have seen many times in history that such investments are likely to fail. This investment stance, and recent events in CCD would make me hesitant about making a long-term CCD investment.

What if you have an existing investment and the news breaks? Assuming there's truth to the news, I would first do my best to get out, regardless of how much I was making or losing.

A close friend made an investment in CCD. He called me just a few days after the news came out, asking for my opinion. Note that the news was only two or three days old when he called me. The situation had improved, but the income was still hidden. He asked me for advice and I told him to get out. He quickly pulled out the CCD chart and asked me to have a look. 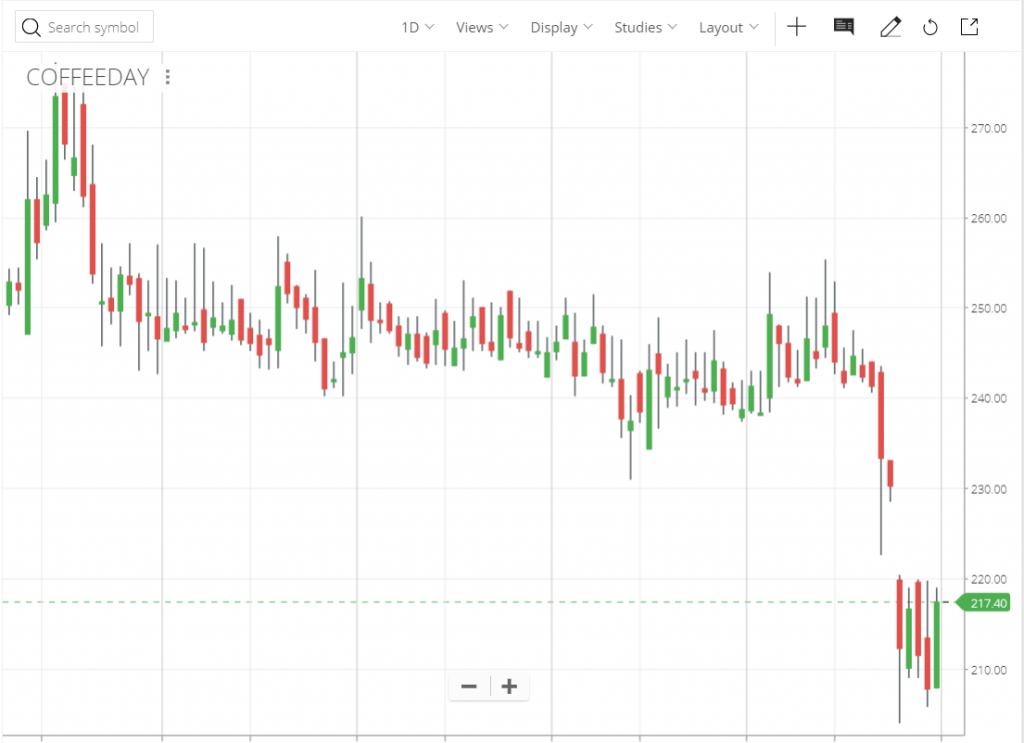 The latest green candle indicates that there was some buying after the steep fall. Perhaps there weren't many traders/investors trying bottom fish.

If you want to escape because of corporate governance issues, then you must. There is no other way. A friend suggested that I keep the item for a few more days before selling it, so that I can get a better deal.

I didn't try to convince him to take the sock off, so I left it at that.

Why do you think my friend wanted to keep the stock? Is the new green candle a cover for the fact that CCD had hidden income? Is it a clear chit for the company's corporate governance or does it override that fact?

It's not my opinion.

It induces a bias known as the 'Recency bias'.

"Recency bias" is a tendency to get carried away by the most recent information and make you forget about past events. My friend is experiencing exactly this: the latest green candle makes him bullish, and he believes there is more to come. There could be an up movement, but it does not override corporate governance. This makes the stock an investment grade stock.

Recency bias can distort your judgment. Recency bias makes it so you are able to weigh the most recent event much higher than you should.

Recency bias can only be overcome by looking at the bigger picture. It is important to be able to see the whole picture and not just the details.